Bev, holder of the WATC Dulcie McDonald Womens’s Masters Trophy stepped onto the podium for a gold medal in Discus with a distance of 20.78m. In the Throws Pentathlon she achieved a silver medal with 3320 points.

Bev placed 4th in the Javelin with a throw of 13.62. She was regulated to the 4th position in Weight Throw with the same distance as the bronze medalist with a throw of 9.75m.

“In most of my events I was the only Aussie amongst a swag of Kiwis” Bev said.

Andrew Ward said distance-wise, his performances were mostly a little below his best.

“My technique was a bit rusty since the competition was out of season. The exception was Weight Throw, with personal bests reflecting strength gains since last season.”

Andrew stepped onto the podium to collect a silver medal in Weight Throw with a throw of 11.35m. “My previous PB was 10.80m.”

He received his second silver medal in Discus with a throw of 31.48m. In Hammer Andrew threw 26.57m and collected a bronze medal.

His medal tally continued in the Throws Pentathlon where he received 2508 points for another silver medal, “I messed up hammer with two fouls so I did a standing throw in third round for safety.” Another highlight was another PB in Weight Throw, with 11.41m.

We want to congratulate both our Masters athletes for a very successful Oceania and wish them all the best for this coming season. 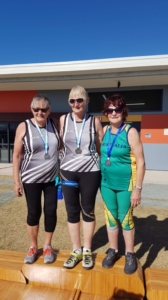 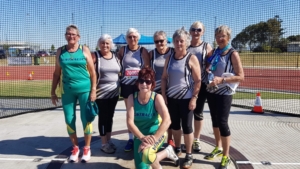