Caitlin Bezuidenhout (14) had a great competition from the 10th to 11th of July at the International Athletics Championship in Pahang, Malaysia. She participated as part of the Little Athletics Western Australian Team.

On the first day Caitlin won the girls U14 Javelin with PB throwing 31.85m. The next day she stepped onto the podium for a gold medal in Shot Put with a throw of 12.86m and threw another PB.  She completed the last of her events achieving bronze medal in Discus with a throw of 26.72m.

The cherry on top was when she was awarded Best Athlete for the Girls U14 of the Competition.

Well done Caitlin and to her coach Janno van der Linde. We wish her all the best for the 2019/20 season. 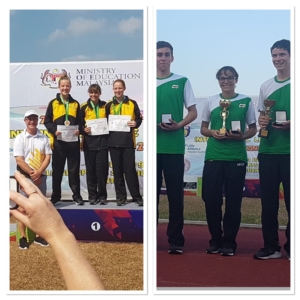