WATC Masters excel at the 2019 Australian Masters Championships in Melbourne

WATC Masters excel at the 2019 Australian Masters Championships in Melbourne

A small team of WATC athletes came home with a medal haul of 19 medals after competing at the 2019 Australian Masters Championships held in Melbourne from 26 to 29 April.

Todd Davey who had neck surgery 10 weeks before the Championships showed his dominance in the M50-55 aged group with a medal haul of 5 medals. He stepped on the podium for three gold medals in Men’s 50-55 discus and Throws Pentathlon and Weight Throw. By winning the gold medal in the Throws Pentathlon he defended his five previous Australian titles. He got silver medals in Shot Put and Hammer Throw.

Beverley Hamilton W70 had a great Championship stepping onto the podium to receive 6 medals. She got gold medals in Discus, Weight Throw and 4 silver medals in Shot Put, Javelin, Hammer and the Throws Pentathlon.

Geoffrey Gee medalled 3 times. He got a silver medal in the Throws Pentathlon and 2 bronze medals in Shot Put and Weight Throw.

We want to congratulate our Masters throwers for their efforts. 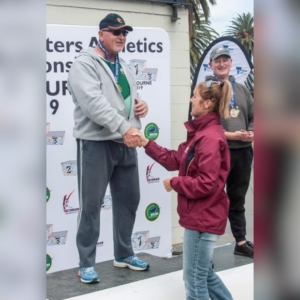 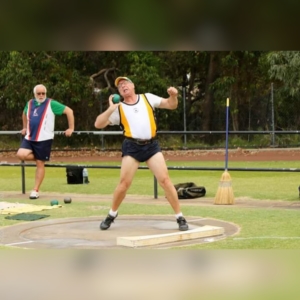